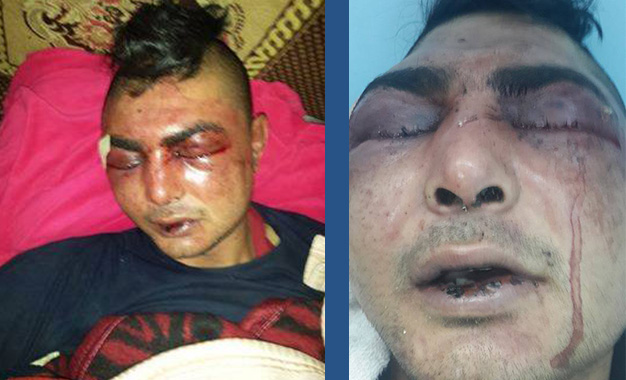 Beaten up and abandoned near a trash container

Mounir went out despite the curfew to get cigarettes from neighbours. He was intercepted by a police patrol on the Mahdia road, Kilometer 4, and was asked for his ID while being patronized for infringing the curfew.

According to his lawyer, Chahine Khelifi, who denounced a case of torture by 3 officers, amounting to a murder attempt :

“On Monday 25 around 23:30, Mounir Abdouli is approached in his hometown of Sfax by 3 officers under influence in Berlingot vehicle and gets beaten up by 3 men who reproach him for violating the curfew regulation (22:00). Mounir explained them he just wanted to get cigarettes. They proceeded with the usual checks, then one of them asks him why he’s not wanted by the police. My client replied that he is a patriot and loves his country, detailing he did his service time and defended his country. The officer punched him in the face.

Inexplicably, 3 officers started to hit him in the face and all over his body. When Mounir fell down on the ground, a 4th agent pressed his colleagues to stop it, telling them they were about to kill him.

They totally tore him to pieces. Mounir will have to undergo 2 surgeries. We’re the first ones to support our police who do an incredible job at protecting et securing the country, but we also must denounce such intolerable behavior. Whatever the circumstances, no one has the right to inflict such violence on another human being.”

The aggressors then dumped him unconscious near a dumpster before leaving the scene. Some neighbors found him there, still unconscious, in the morning of the next day. He was transported to an ICU unit at Hédi Chaker hospital where he underwent 2 surgeries.

The Attorney general opened an investigation. The Sfax Police District Chief contacted Mounir to apologize and said he was outraged about the officers bahavior. Mounir lodged a complaint against his aggressors.